Is there anything better than donning a plastic bib emblazoned with a bright red lobster and diving fork-first into a heaping plate of succulent seafood? We don’t think so!

From hole-in-the-wall shacks by the sea to bustling restaurants inland, there are countless places across the United States to indulge your seafood cravings. We’ve rounded up the best in each state (no, you don’t have to stay by the ocean to eat fresh-caught fish) where you can order luscious lobster rolls, delicate crab legs, shrimp, and so much more. Dine on the water, eat at the beach with a paper plate on your lap, or take your meal to go and enjoy it in the comfort of your vacation rental—it’s up to you!

While the seafood in these 50 spots is the main attraction, the destinations themselves are well-worth a weekend getaway—or longer! Deciding what to order might be tough, but decided where to stay shouldn’t be. A vacation rental from FlipKey provides the extra space you need, plus conveniences like a full kitchen, laundry, or barbecue (surf n’ turf, perhaps?).

Whether you’re visiting the rugged coast of Maine, the scenic shores of Alabama, or even the desert of Arizona, opt for a vacation rental near one of the spots on our list and enjoy an endless supply of fresh seafood. 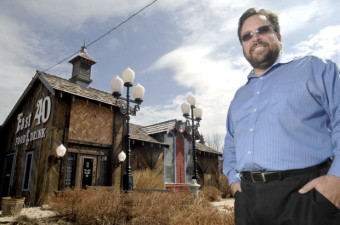 The owners of the Peacock Alley hope to use their healing powers to resuscitate another long-standing Bismarck institution, breathing life back into the former East 40 restaurant.

Dale and Melodie Zimmerman purchased East 40 Food & Drink at 1401 E. Interchange Ave. They are renovating the restaurant, which opened in north Bismarck in 1975 under the ownership of the Conlin family. The restaurant went through two other names and owners before it was returned to the Conlins.

Now, under the Zimmermans, it will be known as 40 Steak + Seafood.

“Our focus is on fresh seafood and great beef,” Dale Zimmerman said. “At 40, we’ll have fresh seafood flown in daily and great steaks. We will have some ethnic fusion foods from Mexico and Asia as well.”

Zimmerman said there are not a lot of choices for fresh seafood in the area and he hopes that will be a draw. Peacock Alley will continue to focus on beef dishes but will have fresh salmon and tuna. 40 will have 10 different kinds of fresh seafood every day.

“We’re not copying what we’ve done downtown at 40,” he said. “Rather, we’re bringing our philosophy to another iconic restaurant in Bismarck.”

The new restaurant also is similar to Peacock Alley in that it has history, Zimmerman said. It’s an integral part of the community with sentiment attached to it.

“If you save something like that it’s a good thing for the community,” Zimmerman said. “Diners in this area have fond memories of East 40, with its quiet, intimate dining rooms, and I don’t want to take that away. My approach is to build on what’s already there.”

The original bricks, which came from the old Grand Pacific Hotel downtown, will remain, along with the fireplaces and woodwork. What is new is the flooring and brighter lighting and paints.

The restaurant’s five dining rooms each have new themes related to North Dakota’s history, Zimmerman said. A mural of 18 historic sites around Bismarck greets customers as they walk down the hallway.

Guests may then choose to dine in the Women of the Prairie room surrounded by photos of homesteaders making sausage or doing the laundry.

The Three Forks Room is a nod to North Dakota’s oil history going back to the 1950s in Tioga, not just the recent development.

“I’m a huge beef guy,” Zimmerman said, which is why he made one of the dining rooms the Cattlemen’s Room.

The Governors Room features a marble floor and spotlighted pictures of past governors, like Gov. John Davis standing with Lawrence Welk and another of Gov. William Langer.

Finally, the Family Room has photos of family events held around Bismarck, like a basketball game played in the Memorial Building or children swimming in the old Elks pool.

East 40 was known for its fine dining experience, but 40 will have a price range closer to that of Peacock Alley, with seafood choices less than $30.

“Anything over $30 I consider expensive,” Zimmerman said.

The “signature steak” is the Tomahawk, a large bone-in ribeye which looks a lot like its namesake. The menu will also feature sushi and fresh oysters. Much of the cooking will be done with sake and wines.

Zimmerman said he will build a beer cooler addition with 32 tap beers and wine on tap. The outside patio will be extended to the sidewalk and will include firepits for guests to sit around. The renovation investment will be about $500,000 in addition to the cost of the property.

Zimmerman said the restaurant will continue to be open throughout the transition. He hopes to have all renovations finished by the Williston Basin Petroleum Conference at the end of May.

There are 700 hotel rooms in close proximity to the restaurant and it is on the north side of town where much new construction is happening. It also has the distinction of being a local restaurant rather than a national franchise.

“I want to make 40 one of the best places to eat in Bismarck again,” Zimmerman said.

Reach Jessica Holdman at 701-250-8261 or jessica.holdman@bismarcktribune.com.

Thanks to the team at KFYR for the coverage!

The owners of a downtown restaurant are spreading their business philosophy north.

Dale and Melodie Zimmerman have owned Peacock Alley for four years, and say they focus on preserving historic parts of Bismarck. That’s why they jumped at the chance to own the legendary East 40 restaurant.

The Zimmermans say the new 40 Steak and Seafood will specialize in seafood and even offer sushi.

Remodeling has started, and each of the five dining rooms will be themed after industries prominent in North Dakota.

With a lot of growth going on in north Bismarck, the Zimmermans say it’s a great opportunity for the restaurant.

“There isn’t a lot of non franchise, non corporate places. We think we have a real in as far as people looking for something local. And being right on the Interstate and Highway 83 and having our own parking lot, we think it’s an ideal fit for what we like to do,” says Zimmerman.

The restaurant will stay open during the transition, and Zimmerman says he hopes to have a re-launch by the third week of May.